Rakesh Nagi is Donald Biggar Willett Professor in Engineering within the Department of Industrial and Enterprise Systems Engineering at the University of Illinois, Urbana-Champaign. He served as the Department Head from August 2013 to October 2019. From November 2016 through March 2018 he also served as the Interim Director of Illinois Applied Research Institute (ARI). He has affiliate appointments in Computer Science, Electrical and Computer Engineering, Computational Science and Engineering, and Coordinated Science Lab. 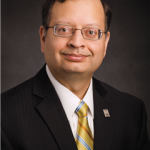